For some of you, fall is here, and you are eating your pumpkin pancakes, drinking pumpkin lattes, and pulling out your tall boots and scarves. Yea, I don't really like you that much any more. Even though its cool where y'all are, its still HOT as heck down here in Texas. I have pretty much abandon the idea of wearing pants until we are no longer in the triple digits. For the record, this was the temperature when I was driving the other day. Yes, I was at a stop light when I took the photo, and yes, I just changed my oil--look at that 100% oil life. Yep, you read that right 107. 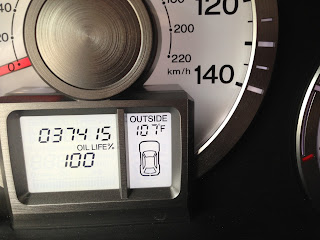 Surprisingly enough, there is a big difference when its 107 outside and only 100. Today we topped off near 100 degrees, and I actually told my assistant, "Wow, its kind of cool outside." Thats when I realized that these hot summer days have officially fried my brain.

Below is a picture of a candle. It sat in the house all day, and when I got home, it had actually started to melt because its so hot. Thats all I have to say about that. 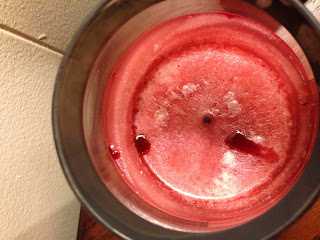 Summer is over for some of you, while for the rest of us, we are still tanning and walking on the surface of the sun. NBD, because when y'all are under 100 feet of snow, we will be be wearing shorts on Christmas day. While some dream of a white Christmas, I dream of Christmas in tank tops and flip flops, but its mostly because I have never experienced a white Christmas.

So take your photos of you bundled up, sipping hot chocolate, walking through the colored leaves of fall. I will just stick my tongue out at you and show you photos of heat waves that I see every afternoon.

Hows the weather where you are? Global warming changing the climate up there?

I live in the southwest and the weather here is beginning to feel like fall, sorry. I won't go on.Hope it cools down soon in TX.

So do 107 temps mean you run on the treadmill? I had a guy tell me he intentionally runs in the heat of the day in the summer to build endurance. I don't care to be that tough-ever!