Its that time of the week to lay it all out there, confess all the stuff we have done wrong this week.

2.I quoted Michael Scott from The Office in a meeting of all men. And no one knew the quote.  We are finishing up a construction job, and in a room of all men, and me (wearing a pink shirt no less). One guy said, "I can see the light at the end of the tunnel. I am not superstitious, but" and then he knocked on the table. In true Michael Scott form, I said "I'm not superstitious, I'm a little stitious." No one knew the quote, then I had to explain it, then I had to explain The Office, and I just ended up looking dumb, not unlike Michael Scott. 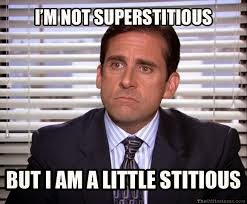 3. I strained my hamstring trying to show off at the gym. At my gym, not a lot of women use the free weights, its mostly guys. And, the guys always give women odd looks. So I decided to do some Roman Dead Lifts with a really heavy weight. I got thru 3 then my hammy locked up and cramped. I had to put the weight down and hobble out of the gym and foam roll at my house.

4. I quoted Michael Scott again to the IT guy. Again, he didn't get it. He was working on my computer and could not figure out what was happening. He said, "Allison, what the heck did you do?" I replied "When the deposed king of Nigeria emails you directly asking you for money, you send it to him." The IT guy froze, and said, "Are you serious? Please tell me you didn't really send money, thats a scam." I had to ensure him that I was totally kidding, and again, explain The Office and the quote from the show.  Maybe its time to stop quoting Michael Scott in the work place.

runners don't do dead lifts, you should know that - j/k that sucks!

my favorite hamstring exercise is feet on a big ball and lift the hips. Or, one foot on smaller ball(or bosu) and lift the other leg straight up then lift the hips! I use A LOT of balls in my training!

bhahahahaha!!! i think the michael scott quotes are more appropriate because no one knows what the heck you are talking about.