I spy with my little eye 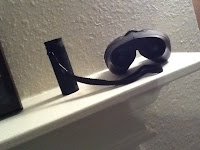 A few moths ago, I confessed that I did this. (see number 4).
Apparently, everyone thought that was really funny. Come on, admit it, you do it too! I thought I might expand on this one a bit.
The picture above is the binoculars that I use when I spy on my neighbors. They live on my mantel.
Across the street is a huge high rise condo building. I have always been fascinated by the way people live, and I want to know what people's homes look like. I promise I am not a creeper, or a voyager. I am just interested in others. It is one reason I like to run in neighborhoods at night. People still have their blinds up and it is interesting to see how they live.

Anyways, yes, I do my spying with those above. They are not quite as powerful as I would like, but they were given to me, so they were free, and I do like my free stuff.

Back to my spying....there have been many a nights where I have sat on my porch and looked at the condo's. Those puppies are expensive, I know because I looked at the different units online to figure out the floor plans.

While doing my observing I have seen a couple fighting on the balcony. At least, I think they were fighting. I made that assumption based on the excessive hand gestures and body language. I have also seen people eating dinner and watching t.v.

The most embarrassing time, was during an air show. P and I were outside in the late afternoon, early evening watching small planes fly by. This gave me the PERFECT excuse to use my binoc's out in the open. As we were standing out watching the planes, I would pretend to search the sky, while really looking into condo's. As I was "looking for planes" I made eye contact with a tenant in the penthouse. He had his binoc's and was looking RIGHT AT ME! Awkward!!
So, yes, I do a little bit of observing. Come on, admit it, you do it too!!!
Posted by Live Simply- Live Well at 11:30 PM

that's hilarious that you caught him doing the same thing!!

I'm like you though - LOVE other people's lives and knowing how they live and what they're up to.

yes! I do love peaking into windows when I am out walking the dog. I get this.